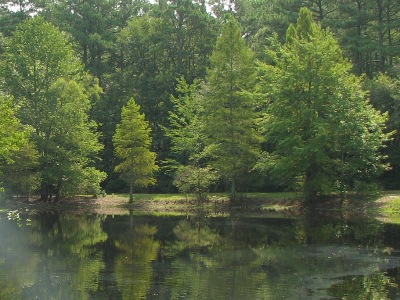 Landowners are faced with dozens of decisions when it comes to designing and building backyard pools, private ponds and other small scale wildlife habitats.

Small projects, such as pools and other impoundments may not be self sustaining, but can be important sources of water for wildlife. Many of the micro environments rely on man-made components such as pond liners, pumps, and external water sources.

Once a pond has been constructed and stabilized, most landowners elect to stock the structure with fish and other aquatic species. When choosing which species to stock in a pond, owners typically take into consideration their overall goals for the project.

Regional fish and game departments usually provide information concerning pond design, wildlife stocking practices and regulations. Many of these resources can save pond owners time, money and frustration. A variety of consulting and engineering firms are also available, many of which specialize constructing and stocking wildlife ponds and other structures. In addition to government resources, and private consultants, landowners often turn to pond fish books for advice on stocking ponds with fish or other aquatic life.

Mosquitofish are an essential species for even the smallest of wildlife ponds. Maintaining these tiny fish can provide efficient, non-toxic mosquito control, as they consume huge quantities of mosquito and other insect larvae.

In the milder parts of North America, members of the bass and sunfish family are often added to wildlife ponds. Popular species for medium and large ponds include largemouth or smallmouth bass, black crappie, bluegill (bream sunfish), redear sunfish, pumpkinseed, green sunfish or other varieties.

In addition to bass and sunfish, some wildlife ponds offer habitats suitable for the growth of rainbow trout, bullheads, channel catfish, pickerel, yellow perch, suckers, or other species. Most pond architects are quick to advise landowners that fish species can have considerable influence on the overall success of the pond. Some species, such as largemouth bass and bluegill tend to co-exist successfully while other varieties can cause problems when placed in the same body of water.

Landowners often add plants in and around wildlife ponds. Aquatic plants are introduced into private ponds in order to provide shelter for fish and other pond life. Many plants, including submerged vegetation and those that grow along the shoreline become important food sources for waterfowl and other wildlife.

Crayfish are occasionally chosen as residents in wildlife ponds. Crayfish devour aquatic vegetation, which sometimes stirs up silt in the process. In most pond habitats, their numbers are kept in check by fish, raccoons, herons and other predators, which helps limit problems with water clarity.

Waterfowl are typically attracted to private ponds. If pond environments include nearby woodlands, wood ducks are easily attracted by providing nest boxes. Food plots are also popular for attracting waterfowl or other wildlife.

Once a wildlife pond becomes established, a variety of birds often congregate to nest and feed in the area. Herons, egrets, ducks, geese, ospreys, eagles, kingfishers, red-winged blackbirds, warblers, and other aquatic species often appear on their own.

Other aquatic wildlife is sure to appear over the lifespan of a pond. Common visitors may include raccoons, opossums, river otters, beavers, muskrats, deer, bull frogs, turtles, snakes, and other creatures. In larger ponds, predation from wildlife is a normal part of pond dynamics and can be beneficial. In smaller settings, predation can wipe out fish or other wildlife, making periodic restocking necessary.