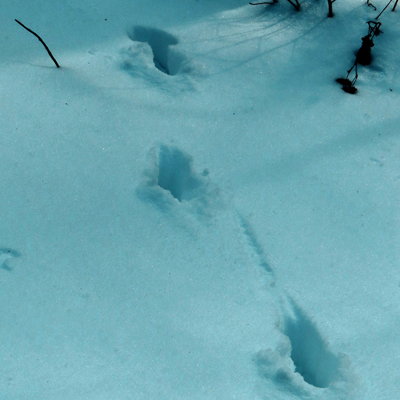 Despite harsh conditions, the winter season is one of the best seasons for observing, studying, and photographing wildlife. During winter snowfalls, animal tracks in snow can provide valuable information about wildlife.

Tracks in snow can be used to identify species, and in some cases, even individuals. Footprints and other markings can provide valuable clues about movements, feeding behavior, population sizes, and other information.

Following snowfalls, animal tracks can be found in forests, meadows, and other habitats. Tracks are also found near lakes, rivers, creeks, and streams.

During field trips, observers usually take note of current conditions such as time of day, temperature, wind speed and direction, direct sunlight, and additional precipitation. When a set of tracks is located, observations may include the size, shape and distance between footprints, general direction, unique features, freshness, and other attributes.

In addition to footprints, a trail may include other clues. Disturbed areas in snow may suggest a tail, underbelly, wings, antlers, or other parts. A close inspection of the trail may also reveal hair, feathers, debris, droppings, pawing, scrapes, kills, or other signs of animal activity.

After locating and studying tracks in snow, the following questions may be relevant:

What kinds of animals inhabit the area?
How many animals are present?
When and where do animals travel to find food or water?
How old are the tracks?
Were tracks made by resident wildlife or migrating animals?
Do tracks provide clues about an animal’s health?